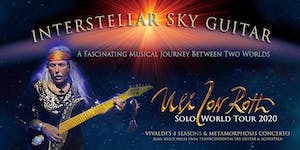 Uli Jon Roth is a German multi-instrumentalist musician who has written his own musical scores and arrangements and achieved international fame with his hard rock and heavy metal work, earning acclaim both as a solo artist and as a member of the popular group Scorpions. Roth has also served as a music director as well as a painter of realistic oil paintings and writer of his own poetry. Many guitarists have looked to Roth's music as inspiration over the years.

He produces his own albums and directs his own videos. Artistically he has been an inspiration to many of his fellow artists as well as his audience and continues to be so. He has been cited by countless guitarists from all over the world as one of their main influences.

Widely recognized as perhaps the single most important protagonist of Neo-classical guitar playing, Uli is seen by many as a trend-setter who has often been considerably ahead of his time.