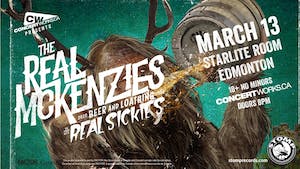 A BRIEF HISTORY OF THE REAL MCKENZIES

Paul McKenzie claims he had a epiphany when he was subjected to an Andy Stewart record which was playing in one room, and intertwining with the vulgarity of a Sex Pistols album emerging from another. That year was somewhere around 1992, the setting was Vancouver Canada,and McKenzie was looking for something new, since his band TT Racer had recently disbanded. Who would have thought that a great deal of fun could be had pilfering your parents closet of old kilts and high socks to wear on a stage on which you would perform cover songs of various bands, altered slightly, to fit a scottish theme. Example: I Wanna Be Your Scot as opposed to I Wanna Be Your Dog. You get the point. Someone probably joked, If were gonna wear kilts, we might as well have a piper too.