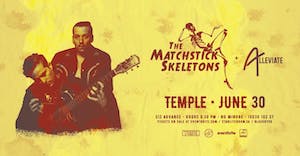 The Matchstick Skeletons came out of the grave swinging. Formed by singer/multi-instrumentalist Neu Mannas and drummer Matty Carolei, this was a project years in the making.

Midway through a decade of being on the road. Neu & Matty starting playing together in Head of the Herd. After some chart topping, radio music award winning, major label signing, touring, & record making in England, Wales, the Southern U.S. of A, and throughout their home and native land of Canada, they decided to lock themselves in a tiny dark room and become the band they always wanted to be.

The Matchstick Skeletons... A James Brown/Lemmy love child nobody asked for.

The band's debut single "Told Ya So" came out in the summer of 2018 featuring a music video with a Tarantino/B Horror vibe. Reaching #19 on the Canadian radio rock chart, that single put them on the road for 2 months opening for The Headstones which brings us to The Know-How EP. A collection of their finest road tested music, and a glimpse into the strange world of The Matchstick Skeletons.