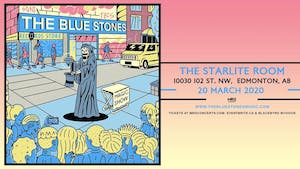 When Tarek Jafar and Justin Tessier formed The Blue Stones, they were facing uncertainty about who they were and where they were going. But they did know they wanted to make music together, and so they did, writing songs over time and eventually releasing their debut album Black Holes in 2018. As confident and self-assured as they are, that record was very much about the pair finding themselves, both musically and existentially, and deciding to pursue the rock’n’roll dream by jumping into a black hole of the unknown instead of choosing a more ordinary life-path.