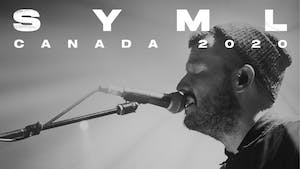 Brian Fennell is a student of simplicity. As SYML (pronounced "simmel"), which translates to "simple" in Welsh, Fennell writes emotive ambient pop songs that capture the ethos of his musical persona. With delicate piano, swells of strings and Fennell's sterling vocals, the songs that comprise his debut EPs "Hurt For Me" and "In My Body," embody the relinquishing of all emotions, a cathartic release laid bare.

"The name meaning simple was the cornerstone of what I wanted in these songs," Fennell says. "Keep it simple because you can't hide behind things as well when it is stripped back and when it is naked and raw."

The approach worked, as proven by break-out single "Where's My Love," which sees Fennell look outward at a romantic partner and wish for their emotional wellness for the sake of the relationship. The song initially received a few sync placements and went on to become a worldwide viral sensation, achieving Gold certification in Canada, Belgium and The Netherlands and surpassing 200 million streams globally.