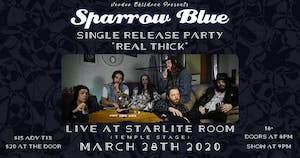 Headlining shows since their first performance in early 2016, Sparrow Blue has grown in popularity in the Edmonton/Calgary area over the past four years. They have shared the stage with renowned artists such as The Wild, The Lazys, Whale and the Wolf, Nightseeker, and Supersuckers. After independently releasing their debut album in late 2018, Sparrow Blue’s 2019 year was spent performing throughout various outlying regions of Alberta and Saskatchewan, also playing the Edmonton Rock Fest and Tralapa Music and Sports Festival. Sparrow Blue looks forward to further spreading their Rock & Roll influence throughout Canada in 2020, starting with their latest single release, 'REAL THICK". Come party with the band March 28 and celebrate the release of their rockin new track!

Listen on Spotify, Apple Music, Google Play, Bandcamp and all other streaming platforms.