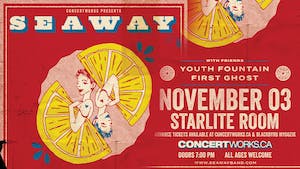 Evolution often happens at just the right time. Six years deep into their career, Seaway progress the patented pop punk prowess that put them on the map with sharper songcraft and a nod to the nineties on their third full-length record, Vacation [Pure Noise Entertainment]. The Ontario, Canada quintet—Patrick Carleton [rhythm guitar, co-vocals], Andrew Eichinger [lead guitar, backing vocals], Ryan Locke [lead vocals], Adam Shoji [bass], and Ken Taylor [drums]—confidently step up their game across the board, while maintaining the spark that ignited a fervent fan base.

“The new music still sounds like Seaway,” explains Andrew. “It’s got that party vibe, and it’s fun, but some of the songs are more mid-tempo. There are some more rock aspects influenced by bands we love like Weezer and Third Eye Blind. I felt like was just a matter of time before those influences came out. It’s pop punk at the end of the day. However, it’s just a little different. We sat down and talked about it. We had more time to put into this than in the past. It’s the first album where we weren’t juggling full-time jobs or school. It was a natural progression.”

It's one the boys have been working towards since their formation in 2011. Along the way, they released two energetic and explosive records—Hoser [2013] and Colour Blind [2015]—and churned out hits such as “Best Mistake” and “Sabrina The Teenage Bitch,” which both cracked the 1-million mark on Spotify. Consistently averaging over 160K streams per month, they toured with the likes of Simple Plan, Neck Deep, and Four Year Strong between landing acclaim from Alternative Press and more.