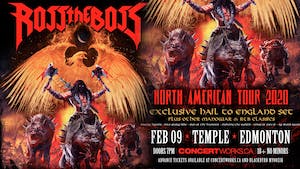 The tour will consist of the album " Hail to England " being performed in its entirety as well as choice cuts from the other 5 records Ross peformed on and a retrospective of Ross the Boss solo material.

As a child growing up in New York City, Ross “The Boss” Friedman showed great promise as a piano and violin prodigy, but when he first touched the electric guitar he knew he found his true love.

He met Andy Shernoff in 1973 while playing in one of his bands at a house party in his teenage years. Together, they created a band known as The Dictators, who became the first signed Punk Rock band launching the CBGBs scene. Known for their sense of humor and affection for White Castles and wrestling, they were one of the most copied and influential bands of the genre.

While Shakin' Street was opening for Black Sabbath and Blue Oyster Cult in 1980, Ronnie James Dio introduced Ross to crew member Joey DeMaio. The two of them agreed on their vision for what a Heavy Metal band should be and together, they co-founded Manowar. They created their own subgenre and dubbed it “True Metal” playing epic songs with viking themes at very loud volumes. His eight years and six albums with this band gained him an unbelievably loyal cult following who widely considers Ross The Boss to be the definitive Manowar guitar player.

Ross The Boss was one of the pioneers of both Punk Rock and Heavy Metal. He's proud to know that the music he's made has influenced and inspired so many other artists. You can be sure that whatever band he's in or whatever style he's playing in, he's always happy to be writing new music and playing the guitar with his friends.

Light In The Black