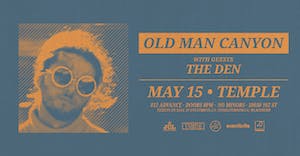 Vancouver’s Old Man Canyon returns with the sun-dappled electronic dream pop of their sophomore album, A Grand Facade. Since their formation in 2012, the band led by multi-instrumentalist mastermind Jett Pace have embarked on a series of tours across North America, sharing stages with artists such as Foster The People, Boy & Bear, and a sold out tour with Australia’s Paper Kites. These opportunities have arisen in part from the prominent placement of Old Man Canyon songs in TV shows such as Shameless, Suits, and Sons of Anarchy, tying their emotionally resonant music to poignant moments of onscreen drama.

Expanding upon the electronic sound of Old Man Canyon’s 2016 album, Delirium, which was produced with superstar producer Mike Butler (Death Cab For Cutie, Fleetwood Mac, The Rolling Stones), every facet of their latest release was recorded by Pace in his basement home studio. A Grand Facade was completed during a trip to the dazzling desert environs of California for a series of jam sessions with members of Wake Owl providing its final flourishes.