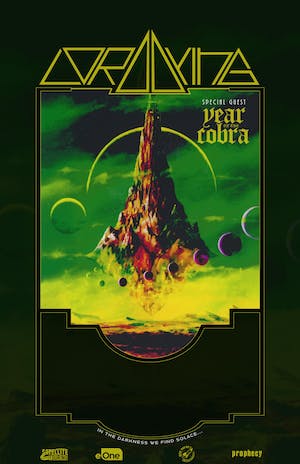 Year of the Cobra, & Guests

LORD DYING with YEAR OF THE COBRA & Guest

Lord Dying come from Portland, Oregon, a place over abundant with purveyors of the heavy riff. A region where the inhabitants are plagued with nerve and joint damage due to lack of sunlight. In a time where everyone is trying to out-sludge or out-doom each other Lord Dying gives something less than a fuck. They are a metal band with members of Black Elk , Portals, Le Force, Dark Castle, and Monarch. Who in their short, one years time as a band have shared the stage with Unsane, Red Fang, Yob, Valient Thorr, and others locally. They have toured in the US with Danava, Lecherous Gaze, Black Cobra, Gaza, Witch Mountain, Red Fang, Black Tusk, Down, and Ghost. This lead to their signing with Relapse Records where they put out their debut album "Summon the Faithless" in the Summer of '13. Upon its release the boys hit the road in the US for 5 weeks with label mates Howl. This was quickly followed by another 5 week tour of the US with Valient Thorr and Ramming Speed. After a successful headlining tour down to Austin where they took part in Phil Anselmo's Housecore Horror Film Festival the guys layed low for a couple months to write a follow up to 'Summon. In January '14 Lord Dying went to Europe for the first time as support for Red Fang and The Shrine. They followed this with a successful headlining tour of the US in February back to back with another European tour during March/April with Red Fang and The Shrine only to end with an appearance at the highly coveted Roadburn Festival in Tilburg NL. Upon their return to the US longtime drummer Jon Reid quit the band and they recruited Rob Shaffer of Dark Castle/Monarch who was happy to do it. Two weeks later the entered the studio to record their sophomore album with Joel Grind of Toxic Holocaust at the helm, that will be released shortly after. Lord Dying are here to pummel with heavy riffs and promote simpler things like Cold brew-Hot Shower.

YEAR OF THE COBRA