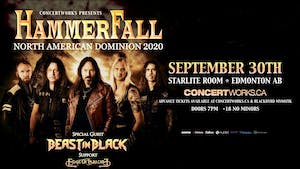 Beast In Black, Edge Of Paradise

Formed in Göteborg, Sweden, in 1993 by guitarist Oscar Dronjak. Early line-ups included members from In Flames and Dark Tranquillity, most notably Jesper Strömblad, who continued to write songs together with Oscar and singer Joacim Cans despite leaving before the first album was released. Glory To The Brave (1997) and Legacy Of Kings (1998) cemented the band as the pioneers of modern Eighties heavy metal.

HammerFall stands for powerful, majestic and melodic heavy metal. The memorable choruses, straight and heavy riffs, thundering drums, pounding bass power and outstanding vocals will without a doubt become metal hymns for eternity. Their unstoppable creations reigned in a time when none cared about classical Heavy Metal, and they have and will always deserve credit for bringing the melodies back to metal music.