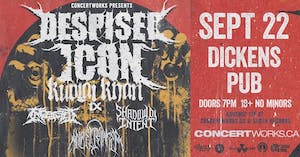 Imagine a creature laying dormant beneath the earth, in an inhuman slumber since a time long forgotten. This creature reawakens, cracks up through the ground and finds a world it barely recognizes. Chaos, disorder, brutality, bloodthirst and terror are all around. Seeking to restore some sense of order to its surroundings, the creature adopts the destructive nature it witnesses in man and begins a vengeful quest for power.

Mythology, fable and metaphor collide with BEAST, a blistering new album marking the return of DESPISED ICON. The genre-defining band is fully reawakened, poised to recapture the crown with the monstrous and merciless might of their potent expression. Featuring the men responsible for most of the band’s now classic death metal catalog, BEAST is a vicious commentary on the state of the world and the state of music itself.

This is old school Despised Icon reminiscent of The Healing Process (2005) and The Ills of Modern Man (2007), but cast through an ultra-modern lens, carrying with it the experience and driven purpose of a band secure in their identity and their legacy. Without sacrificing the creative leaps of what many feared would be their final album, Day of Mourning (2009), Despised Icon renew their focus on the collision of dual vocals, technical wizardry, precision dexterity and massive bottom end they helped to pioneer.