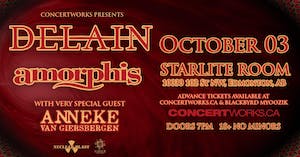 IMPORTANT REMINDER: the Starlite Room is a private venue for our Members and their Guests. If you require a membership you can purchase on the Starlite Room app, or at the venue. For more information please visit: http://www.starliteroom .ca/memberships/

A lot has happened with Dutch band Delain since they unleashed their second album April Rain on the masses in 2009. An extensive headliner tour of Europe was followed by euphorically received tours of North and South America. The live impressions and pure energy that all this activity brought the band is now clearly audible in the material featured on their new material, the band's third. Delain took the time they needed to make We Are The Others, by far the most powerful, atmospheric and irresistible album of their career!

All this despite the fact that the old music biz adage still holds…ah yes, the "difficult" third album! Delain's musical mastermind and keyboardist Martijn Westerholt nods in agreement. "For me these were the recording sessions from hell! I was working with a producer for the first time, so I had to let go of so many things. That's not easy for a control freak like me!", says Martijn, who mastered the situation brilliantly, despite any difficulties. Singer Charlotte Wessels also laughs and says, "Yeah, I already heard the same old wives' tale about the second album! But honestly, we have the perfect songs, songs that will blow away everything both live and on CD!"With their 2009 album, Delain had actually already arrived at a position that other bands work for years or even decades to get to. They firmly established a foothold at the very top of their genre alongside contemporaries like Evanescence and HIM. Now this Dutch formation is an indispensable part of the ever-growing, evermore exciting mainstream market for popular rock music of a darker nature. Against this backdrop, the expectations for the follow-up album to the frenetically acclaimed April Rain were very high indeed, both from the Delain fan base and from the band themselves. With We Are The Others, Delain have not only met these high expectations; they have far exceeded them. And they've made it all look easy in the process, broadening out of a niche market and audibly developing musically while remaining true to the successful sound that they lovingly developed over the years. While Martijn has been primarily responsible for songwriting duties, with Charlotte in increasing matter over the last two albums, for We Are The Others they relied more heavily than ever on team effort together with their musical partner Guus Eikens, also involving arranger Oliver Phillips in the composing department, stretching their experimental wings to try new things and ultimately came up with a more multifaceted overall sound than ever before.

The band spent most of last summer with the "Tripod" producer-team, consisting of star producer Jacob Hellner (Rammstein, Clawfinger, Apocalyptica ...) and the Epicentre-Team (Fredrik Thomander und Anders Wikström / Scorpions, Backyard Babies...) in the TriPod-Studios in Stockholm, taking two months to collectively fine-tune the material for We Are The Others. "Never before have we gone as much into detail in writing the songs" Charlotte reports, referring to the multiple writing-session on songs and lyrics in Stockholm, where she was recording her vocals parallel in a second studio. "Jacob works very instinctively and has a great nose for good songs. At the same time he is the most critical producer I've ever worked with! I was around one day when they were recording the bass. Our bassist had to play the same riff over and over again, virtually for hours in a loop. Jacob listened closely and said, 'I hear a boring note in there somewhere. Try to fix that!' It was fucking hard to work with him, but it was also unbelievably fruitful and inspiring. The result is that what you hear in the songs is a highly tuned, compact band that plays well together, not some side project. We're incredibly proud of the result!"Martijn Westerholt, a workaholic himself, agrees entirely. "Our drummer was sent for two weeks of drum rehearsals to the Backyard Babies rehearsal studio located nearby. Jacob pushed every one of us to our absolute limit and in many cases beyond! He really knew how to get the maximum out of us individually, out of Delain as a band and of course out of our songs!

You can find more on the recording sessions in the band's video studio at http://delain.posterous.com/.

While the title We Are The Others may seem mysterious and conspiratorial at first, there is a very serious background: The lyrics to the title-track were inspired by the hate-crime against a British girl named Sophie Lancaster in 2007. She and her boyfriend were beaten comatose by a gang of youths, because of their goth looks. Sophie died from her injuries (check also: http://sophielancasterfoundation.com/). This tragedy sent shock waves throughout the world. DELAIN's response to this tragic case is expressed through the song We Are The Others.

Charlotte says: "Sophie's story hit close to home for us, being part of a subculture ourselves but it's in no way an individual case; people are discriminated against -all the time- to the point of violence - based on their cultural or ethnic background everywhere. We Are The Others is our own 'outsiders anthem' for everybody who, deliberately or not, diverts from the norm. Whether it's by looking different, acting different, or choosing a different path in life then is expected from you.

Delain have taken the same kind of path with We Are The Others. The band is armed with true musical hooks in tracks like "Are You Done With Me?" and "Get The Devil Out Of Me". And "I Want You" may well be the most macabre love story of the year, as Charlotte explains with a wonderfully diabolical laugh. "Although it lyricly starts like your typical romantic song, this tragic love story ends with the leading character running over her lover with a car; If she can't have him, then no one else damn well will! There aren't any actual autobiographical traits to the song – my boyfriend is doing fine (for now) – but it definitely contains some dark, most vengeful payback fantasies I admit."

One of the album's less typical moments for a band of this genre is "Generation Me", where Delain demonstrate their eagerness to experiment as well as their topicality. "It's about the so-called 'iGeneration' where everyone's putting self-branding and this utopian kind of self-representation in front of everything else, we ourselves -whether we like it or not - are very much part of this generation, and in this song we make fun a little out of everyone taking themselves so seriously. With this kind of subject matter it's easy for us to be inspired. My lyrics have always been influenced by real life, from what happens around me" lyricist Wessels explains. This is also evident in Delain's powerful number "Where Is The Blood", with none other than Fear Factory shouter Burton C. Bell on guest vocals.

"I met him at the Wacken Open Air festival. We immediately got along great and exchanged e-mail addresses. I think his raw voice is really perfect for the insane scream part on this track!"

AmorphisFounded in 1990 in Helsinki, Finland-based melancholic metal masters AMORPHIS wrote music history, incl. classic albums like f.e. their debut »The Karelian Isthmus« (1992), their breakthrough »Tales From The Thousand Lakes« (1994) and »Eclipse« (2006), their first album with the new vocalist Tomi Joutsen, which marked the beginning of a new era in the band‘s history.

A few months ago, AMORPHIS kicked off the celebrations for the band's 20th anniversary of »Tales From The Thousand Lakes«, which delights the masses even today. Regardless of their relentless touring schedule, they secretly returned to the studio to write and record their forthcoming, twelfth record with famous producer Jens Bogren (SOILWORK, KREATOR etc.) at his Fascination Street Studio in Örebro. The result of this two-month recording session is once again a heavy, melodic statement, called »Under The Red Cloud«.

During the recordings, the sextet was joined by some famous guest musicians: Chrigel Glanzmann (ELUVEITIE) played flutes on 'The Four Wise Ones', 'Death Of A King' and 'Tree Of Ages', Martin Lopez (ex-OPETH drummer) played percussions on 'Death Of A King' and Aleah Stanbridge (TREES OF ETERNITY) sang guest vocals on 'The Four Wise Ones', 'Sacrifice' and 'White Night'.

“It was a great honor to have such talented musicians appearing on »Under The Red Cloud«,“ guitar player and founding member Esa Holopainen comments. “Each one of them puts his/her personality and character in the very right spot.“

The whole recording process was a time full of extremely intense work for AMORPHIS. “It was the first time, that I woke up at 08.00am to start recordings. They went on until 06.00pm in the evening - every day! But the result was definitely worth it,“ the guitarist continues. “It was a great experience and Jens made us playing more aggressive and working really hard“, drummer Jan Rechberger adds. Jens Bogren also handled the mixing and mastering of »Under The Red Cloud«.

“The new record will go in a similar direction like »Circle« but on the other hand it reminds a lot we did on »Elegy«”, Holopainen reveals. „There are a lot of variations in the songs, but the overall feeling is very dynamic and melodic“.

A perfect example for the variety and feel is the first single 'Death Of A King'.It starts with an oriental melody & crashing drums, and has a lot of dynamics. The follow-up 'Sacrifice' is more upbeat and relies more on the soaring lead melody, like the opener 'Under The Red Cloud', which starts with a tension-creating piano intro. The title track flows over into the double bass-dominated and one of the most aggressive songs on the album - 'The Four Wise Ones'. Finally, the closing track 'White Night' marks a kind of summary of the album, because it contains some trademarks of other songs like an oriental feeling or driving double bass drumming at the end. So it’s a worthy last chapter of the story, AMORPHIS are telling us this time.

The new album’s lyrics were written by Pekka Kainulainen, as per the previous four releases. „He has become a sort of ghost member of the band“, Holopainen adds. „His lyrics aren’t forming a complete storyline, but they form a certain there. Pekka describes things like natural phenomena, seasons and the human mind like we’ve done in the past with the Kalevala stories. They are attempts to gain advice from higher powers“.

In typical AMORPHIS style, the band wanted the album artwork to be representative of the lyrical themes. French artist Jean-Emmanuel ʺValnoirʺ Simoulin (LAIBACH, PARADISE LOST, MORBID ANGEL and WATAIN) realised the band’s vision, which Esa comments on: „Valnoir did superb work. The colours and themes are perfectly fitting to the record“.

Her first appearance on a release is: The Mess (8) - King Moron (The Original Soundtrack From The Motion Picture Of The Same Name).