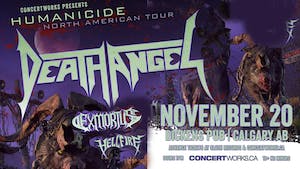 San Francisco's Death Angel are the product of the bustling Bay Area thrash metal scene of the 1980s. Combining serious guitar crunch and speed with technical expertise, they create complex thrash metal filled with time changes and tricky arrangements, and are considered to be one of the "big eight" of the genre, alongside Metallica, Megadeth, Slayer, Anthrax, Testament, Exodus, and Overkill. Emerging in 1982, the group found underground success with their first two albums -- 1987's The Ultra-Violence and 1988's Frolic Through the Park -- before dipping their feet into the mainstream with their 1989 major-label debut Act III. They ceased operations in the early '90s, but re-formed in 2001 and continued to tour and record, releasing neck-snapping LP's like The Art of Dying (2004), The Dream Calls for Blood (2013), and Humanicide (2019), with guitarist Rob Cavestany serving as the only constant member.