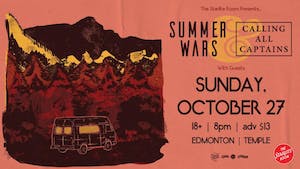 St. Albert based pop punk band Calling All Captains burst into the scene in 2014 and have since been tirelessly developing their sound amidst the newest wave of the genre, evoking elements of early 2000’s emo-infused pop punk to blend with their own brand of modern easycore angst. Their haunting lyrical sentiments and infectious melodies seldom fail to provoke a crowd amassed scream-a-long.

After the release of their freshman and sophomore EP’s, the St. Albert five-piece have worked tirelessly to spread their heart-wrenching, anthemic songs across the globe. With an 8 week cross Canada tour, a showcase spot at the Portland, OR Warped Tour, and a self-funded DIY UK Tour under their belts, they've stapled their dreams to the soles of their shoes and haven't looked back.

The band’s relentless work ethic and reputation for their high-energy inspired live shows has been a testament to their explosive growth, with their debut full length album still on the way.