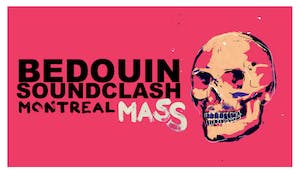 mouth of the Mississippi there was a long drought. Nine years passed since Bedouin

Soundclash’s 2010 release Light The Horizon. During their hiatus it wasn’t clear if the

morning I was sitting at the piano in my house and “Clock-Work” came to me,” says

Malinowski talking about the first single from the album. “I thought, this is something

new, I think it’s a Bedouin song—I put it on a break-beat and sampled these horns from an old big band swing record and sent it off to Eon.”